Tribal Cuisines of Uttrakhand bring you some never before experienced flavours from the lap of nature, abode of the great Himalayas and the holy beaches of Ganga. This is food of the 'Dev Bhoomi', the unexplored cuisines of Uttrakhand. It is like an auspicious expedition to explore the land of the gods, a cuisine so appealing that it makes it a heavenly experience.

The land belongs mostly to the Pahari, Garhwal and Kumaon regions of Uttrakhand. The food is extremely nutritious to suit the high energy requirements of the hilly and cold climes. The food is cooked traditionally with love and affection over charcoal or wood fire.

The food of this Dev Bhoomi is highly influenced by the topography and lifestyle of the people. The culture of the people can be found extravagantly in their festive food. People of Uttaranchal are fond of both vegetarian a well as non vegetarian food. The characteristic feature of tribal cuisines of Uttrakhand is the sparing use of milk and milk products. This is due to the fact that in most regions of Garhwal and Kumaon the cows do not yield good quantity of milk. Rice is the staple food of the people, but the favorites are the lentils. The most famous dish is Bhatt (a variety of soya bean) and the rust brown Gahat also called Kulath. Among other lentils delight are large dried balls of urad dal, called badis and their smaller version prepared from moong dal called mangodi. These delights are consumed mostly during the winter seasons.
One of the common culinary delight of Uttrakhand comprise Munduva (buckwheat), which is a coarse grain with high fibre content. The use of tomato is minimal and food is essentially cooked in mustard oil or pure ghee. Very interestingly, hash seeds, locally known as Bhanga are used as spices.

The popular sip is Jaya; a salted tea, Chaans Dunghar; butter milk tempered with chives is great to start a meal with. Appetizers include Birude; a tangy preparation of black channa and peas, Panchola; a tender lamb in local spices is quite an experience. Bhutwa are lamb intestines cooked in local spices on charcoal heat.
Bhatt ki chatkaney is soybean tempered in ghee along with onions and garlic in a gravy, served with rice. Pahadi karele ki subji are from thorny karelas cooked dry in tangy masala preparation, Haalang ki subji is local green vegetable cooked in buttermilk, Dhare ki subji is colocasia roots cooked in a traditional recipe, Toopki; whole spinach leaves cooked in iron wok and stirred continuously until smooth in texture. Palyoo is a delicious local curry made out of buttermilk. Other vegetarian repertoire also includes; Aloo ke Gutke, Sani hui Muli and Nimbu, Singodi, Kumaoni Raita, Kandalee ka Saag, Kaafli and Kulath Phanu.
Rice preparations include Bhaat a steamed red rice, Zaula; Rice cooked in buttermilk and Khaza which is a sweetened rice. Breads include Seeyal; made out of ground rice, Madé; a bread made out of rice flour batter, Puwa of rice flour. Roté is a bread made out of wheat flour, jaggery, milk and deep fried. Quaraal ka raita are flowers of a local tree blanched and mixed in sour buttermilk.
The popular Bhang ki chutney is a dip made with hash seeds. Til ki chutney is a flavourful sesame seed chutney, Kumouni raita is made with cucumber and tempered with mustard. Desserts include; Bal Mithai; a local sweet from the region, Arsa and Gulgul; Jhangora Ki Kheer.
What makes the food of Uttrakhand such a delight is the way the people of the state present it and the sincere hospitality with which they treat their guests.

The majestic himalayascapes of Uttrakhand bring you these rather aromatic and earthy delicacies from the simple abode of the tribes who live here. 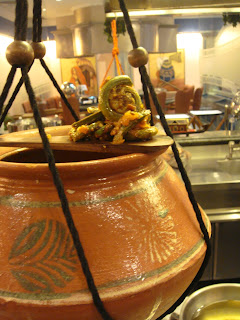 By : Devraj Halder
N.B. : I thank my friends Sukhangad and Sunil for their contributions.