Recently I happened to read a bit about the cold war days between USA and the then USSR and couldn’t help draw a comparison between the American success and emergence as a super-power vis-à-vis the abject failure of India, post independence to match up horns with the developed nations despite availability of rich resources. The cat and mouse game for superiority and survival between the two super powers lead to empyrean technological and comprehensive advancements. While in India we had our intellectual challenges pitted only against our kin turned foe, Pakistan.

It was never a battle among equals but India like a bullish elder brother revelled in gleeful celebrations at every trifling win over their propagandist arch rivals. Evidently we lost our way, we failed to see the bigger picture, we mitigated our potentials and never drove our intellects hard enough and abreast quantum technological and academic advances the world over. So then, what is the fuss all about. It is the big Pakistan dream or rather its lustful atrophy gone sour. The two countries have romanced with a dagger, close to a century now towards a mutual spiralling downfall.

I view the present economic and ethical conditions on either side of the frontier with anguish and wonder the need for such wasteful animosity.

I once happened to be at the epi-centre of a culinary exchange program appropriately coined then as the ‘Samjhauta Express’ between the two cousin countries. Along with great food there was great bonhomie. We had two great chefs come over from Lahore and treat us to some spectacular display of an estranged cuisine. The semblance was astonishing. It was like two sides of the same coin. This was the real romance and here the point of convergence were our cuisines.

The conversations over our spirited meals together were guarded at first and fluid subsequently. We spoke of the cuisines of Balochistan, Khyber, Makran, Sindh, Punjab and surely enough about Kashmir. The karahi and handi preparations are significant dishes with meat and vegetables alike. The Peshawari karahi and chapli are traditional, robust and aromatic preparations. The kofta, keema, korma, karahi and kebabs are culinary corner-stones of the historical spice-trail, I find so enchanting in the cuisine of Pakistan. It is not that we are unfamiliar with any of these culinary masterpieces created with care over fire in a cooking vessel or a skewer but curiosity and estrangement makes them even more desirable and special. There re-surfaces the romance once again!

While on the subject of food ( which I take liberty to discuss amidst the myriad internal turmoil within the two nations) the hypothetical barriers dissipated. The emotional bonding was tangible under an undercurrent of bereft.

The divide and rule policy employed by the British still has the two nations divided, divided at the head but not at the heart. This compulsive divide may remain forever but it is for us to understand what that destines us to. Our measly state of internal affairs suits the larger schemes of the other side of the world to keep two highly resourceful countries down and trodden.

While I take the softer route the food route which would always bind us together, during this significant exchange of matters of the heart we spoke about the sikanjabeen, sheermal, taftan, pakoras, samosas and halva-puri to the gulabi chaai, sherbet and hand made ice creams. The aloo-gosht, darbari sole fish, pasandey, paaye, sultani daal were memorable preparations. The chicken jhalfrezi, balochi, balti, dopiaza, tasted rich and rather different. The beef nihari was rustic and the saag familiar.  The discussions on Muhajir or the cuisine of the migrants from various parts of India and its amalgamations were absorbing. Certain preparations were interesting with decorative names, pulao dilruba, shan bihari kebab and fauji keema.

Dal kebabi and Gulati; ghee, fried milk solids and rice dessert were impressive. The Sindh biryani, tahiri and pulao tasted nostalgic. The desserts seemed to have arrived from the popular corner halwai shop and tasted exquisite with the realisation that the gulabjamun, kheer, zarda, halva, shahi tukda, actually came from beyond the Wagah border.

The waft of the fragrant itar was playing on our mind weeks after our colonial cousins were gone.

Who shrunk my food !

Just how exotic are exotic cuisines today. You surely don’t need to travel half-way around the globe to savor them.
They are so alarmingly near that it does take quite a bit of the zing off the exotica-factor !

World-food has just shrunk, well who shrunk my food !
Exotic cuisines derive from their rarity, awesome facts and the mammoth stretch it needs for you to reach to them.
Say for example the cuisine/s of the Malagasy speaking tribes of Madagascar may sound exotic for us but for them it is daily bread and butter.

You can easily count a hundred cuisines in a modern metropolis and is growing by the day. Ethnic cuisines are getting delocalized. They are also getting a contemporary-makeover.

I am a great believer in simplicity and the cuisine which is surfacing is truly ‘simply-exotic’
Tasting menus present an entire new dimension to world cuisines and literally shrink them on your plate and latter on your palette.

Exclusivity is still a defining factor. A diner takes notice of the source of his food. The food supply chain is an ever changing more complex grid, you can source products from a plethora of destinations some even abstract but surely proportionate to your passion to hunt them down to your kitchen pots.
At this point I sometimes do wonder the credibility and appropriateness in cooking application/s of exotic ingredients in the hands of novice chefs. Well just because we don’t need to break much sweat to get them the novelty factor and awesomeness gets seriously undermined.
I remember cooking a prized black cod or a now-humble bunch of green asparagus with ginger-fingers owing to the value as well as the perceived value of the ingredients when they were rarer.

Well coming back to the shrinking cuisine/s,  I feel exotic cuisine needs to be redefined.
Well traveled and well exposed diners get an extravagant amount of variety to lay their fork on and new-age diners are an insatiable lot.

So till then.. on my piece on exotic cuisine redefined ! 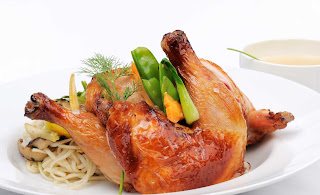 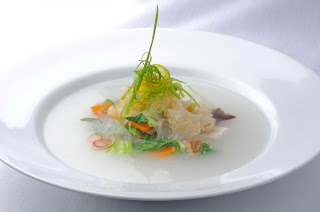 Add all the ingredients to the vegetable stock and simmer for 08-10 minutes.
Remove the scum that may appear on the top.
Serve immediately.

Posted by Devraj Halder at 09:58 No comments: 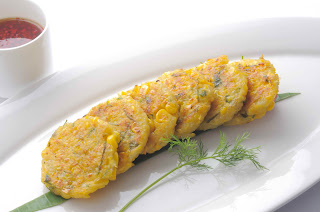 Amér was built by Raja Man Singh I. The ancient princely state gave rise to a royal cuisine. Amer was known for its artistic style blending both Hindu and Rajput elements. Later Raja Man Singh also the commander in chief of Akbar’s army took the legacy forward.

The proud warrior kings who went on hunting expeditions ate the meat or the fowl that they brought back for their beautiful and illustrious queens in shikars. Even today princely feasts flaunt meat cuisines that are incomparable. In contrast are the vegetarian repertoire, the food cooked in pure ghee is famous for its mouth- watering aroma. Curries are based on the use of pulses or gram flour. Dry fruits, spices and yogurt are used in many delicacies. Also the land of Jai Singh I and Sawai Jai Singh II, Amer shows off many a fine gastronomic heritage both within the palaces and outside.

In royal kitchens the preparation of food was a complex matter and was raised to the levels of an art form. The 'Khansamas' (the royal cooks) worked in the stately palaces and kept their most enigmatic recipes to themselves. Some recipes were passed on to their descendants and the rest passed on as skills to the chefs of semi states.

Cooking was inclined to the war-like lifestyle of the medieval Rajasthan and the availability of ingredients of the region. Food that could last for several days and could be eaten without heating was preferred, more out of necessity than choice. Scarcity of water, fresh green vegetables have had their effect on cooking.

Some of the popular dishes include- Karhi, popularly known as khatta, made of buttermilk with chickpea flour, mustard seeds and crushed garlic, cooked on slow heat. 'Gatte ka saag', cooked with freshly made dumplings of chickpea flour, 'badi ka saag' prepared with sun-dried moth-lentil dumplings. Khichra a porridge of millets and moth lentils that is cooked along with water, spice and some ghee in combination with jaggery or karhi forms a staple part of the diet. The hot red-chilli-and-garlic chutney, 'raabori' and millet flour cooked in buttermilk were popular accompaniments. Sangri and ker (desert berries), vegetables such as okra, jackfruit, eggplant, mustard and methi leaves. Over the years the variety of dishes were cooked with same unique techniques that passed on generation to generation. Other typical delicacies are Dal-baati, Panchkoota, Laapsi, Chaavadi, Ghoogri, Guwar fali ki saag, Papad ki sabji, Meethe Chawal.

The selection of these truly sumptuous silver-platter is an assortment of curries, chutneys, pickles, meats, veggies, breads, rice and sweet all on one must try juxtaposition !

Posted by Devraj Halder at 01:03 No comments:

Whats in a Banquet !


There are only two tangential views that exist on banqueting; one, it is a gluttons paradise and for the other it is a distasteful concept of communal dining !


The debate is not about which side you are on, it is about something which we can just not ignore. So what exactly is trending in banqueting and what makes this traditional service more inviting and connected to the present genre.

What is trending in contemporary banqueting.....

What executes a great party event..

Posted by Devraj Halder at 09:51 No comments: