Tajik Cuisine - The beginning of the spice trail

Tajikistan means the ‘Land of the Tajiks’. In medieval Persian literature, Tajik appears as a synonym of ‘Persian’. This mountaneous land locked country with Persian speaking Tajik ethnic group, the territory of which is now the Republic of Tajikistan has been inhabited continuously since 4000 BC. It has been under the rule of various empires throughout history, for the longest period being part of the Persian Empire.

Arabs brought Islam in the 7th century, more or less forcing the people to convert. The predominantly ethnic Tajik cities of Samarkand and Bukhara remained in the Uzbek SSR. The proportion of Russian among Tajikistan's population meanwhile also grew. Post the political turbulence and the civil war Tajikistan is officially a republic and holds elections for the presidency and parliament. The government of India rebuilt the Ayni air base, a military airport southwest of capital Dushanbe, It is now the main base of the Tajikistan air force.

The long and eventful history of the Tajiks have given rise to a varied and enigmatic cuisine.

The Persian lineage and the muslim community has given the cuisine of the Tajiks its own personality with characteristic influence like the usage of abundant dried fruits, local fresh fruits and vegetables, goat milk yoghurt, robust home made breads like rye, wheat and non, hearty soups like the solyanka, great varieties in unique sheesh kekobs, aromatic and rich pilau, sambusa, lemon cake and much more. The Tajiks believe in festivity and their culture is equally glamorous. The food is hearty and delicious.
A typical meal starts with Halva ( essentially made of wheat ). Appetizers include Shashlyk Lipioshka ( tender lamb shashlik served with flat bread and sliced onion) , Seekh Kebob ( minced vegetarian and meat on skewers), Sambusa (minced turkey filled fritters), Vatushiki (spinach and cheese filled deep fried crispies). Popular soups are Shorpur Laghman (meat and vegetable soup with noodles), Kaurmo Shurbo (vegetable soup ), Mastoba ( rice soup ).

Some typical salads are Hissar (traditional tajik salad), Stuffed Aubergine Salad. Fresh whole fruits, fresh whole vegetables and a variety dried fruits and nuts are a regular part of a balanced meal. Several dips and dressings are also prepared to lend variety and compliment a meal. 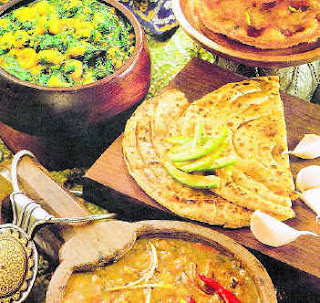 It is mystical to think and realise that it all started here the beginning of the spice trail from the Turkish coasts all the way to China and also to Afghanistan and further to India. Tajikistan played such a pivotal role and the thoroughfare helped cultures change hands along with the passage of bounty that the trail witnessed for centuries !