The essentials of Yin-Yang school of thought are divided into two opposite principles, which oppose one another in their actions. Yin-Yang and the five material agents can explain all changes in the universe. Yin-Yang denotes the sense of continual, cyclic and constant movements of these two energies; yin to yang and yang to yin causing everything to happen and no one principle dominates the other or determines the other: just as things expand and contract, temperatures change from hot to cold. Since no principle dominates eternally, this means that all conditions are subject to change into their opposites which also means that all phenomenon have within them the seeds of their opposite state, i.e., sickness has the seed of health and health has the seeds of sickness. This is called “presence in absence”.
The traditional symbol of the forces of Yin and Yang, sometimes describe as two fish swimming head to tail. The concept of Yin-Yang relates to food as food always have a sense of balance in colour, flavour and textures. Certain foods are believed to be Yin or cooling properties while others have warm, Yang properties. The challenge is to consume a diet that has a healthy balance between the two. When treating illness, an oriental physician will frequently advise dietary changes in order to restore a healthy balance between the Yin and Yang in the body. In traditional Chinese, food is used to treat the body as diet, tonic, medicine and abstention.
The concept is exemplified in cooking methods as well, while Yin denotes boiling, poaching, braising and steaming, Yang exists in deep-frying, roasting, grilling and stir-frying. Certain foods like bean sprouts, cabbage, carrots, crab, tofu, duck are Yin foods while meat, eggs, ginger, mushrooms, wine, sesame oil is Yang foods.
The Yin-Yang concept can be thought of as simply a way to keep life in balance with healthier fare, which compliments each other to connect the opposing forces. It is like the law of averages, all detours need to culminate and neutralize each other, that is the only way to achieve harmony, balance and health. 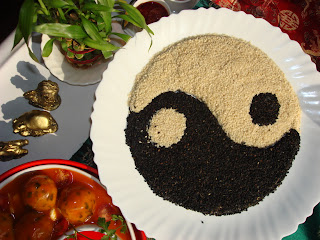 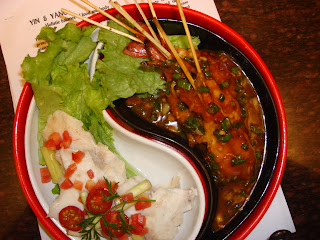